Many beautiful Hingham gardens are the responsibility of The Garden Club of Hingham. The club’s members do the physical work of planting and maintaining the Old Ordinary Garden, the gardens at the Hingham Public Library, the traffic islands in Hingham Center, and the new Founders Park, located where North and South streets merge.

The Garden Club of Hingham has been the faithful steward of the Olmsted Garden at Old Ordinary, located at 21 Lincoln St., for 70 years.

The sunken parterre garden (an ornamental garden with paths between beds)  is a blaze of color starting in the spring and continuing into the fall, featuring hosta, astilbe, fairy roses, daylilies, anemones, peonies, balloon flowers, ferns, and other plantings — mostly in shades of pink and blue, with apricot, yellow (daffodils early in the season), and white floral accents.

The building — which houses the Old Ordinary Museum — was a tavern during the 17th Century and was donated to the Hingham Historical Society by Hingham philanthropist Wilmon Brewer in honor of his father in the 1920s.

The firm of Frederick Law Olmsted designed the garden, perhaps as a wedding present to “Mrs. Francis Cornish.”  The Rev. Louis C. Cornish and his wife, Francis, were married in 1906 and purchased the Old Ordinary at that time. Rev. Cornish was the minister of Old Ship Church and used The Annex at the back of the property as his study. In 1938 Harold S. Ross restored the garden to its original state for the Hingham Historical Society. The Garden Club of Hingham has maintained the garden since 1952.

The community is encouraged to stop by the garden — which is still in bloom — for a breath of fresh air and to help cultivate a sense of inner peace and solace during these challenging times. Visitors can also sit on the bench and enjoy the flowers and the nearby gazebo. 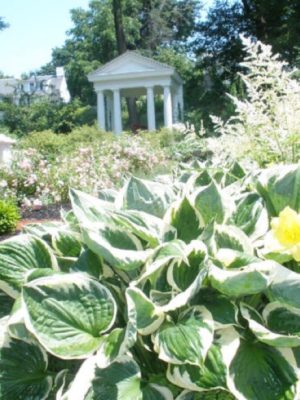 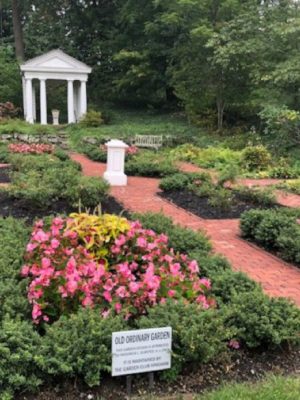 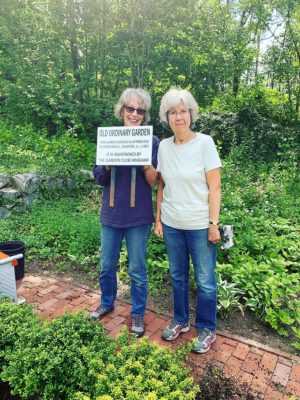 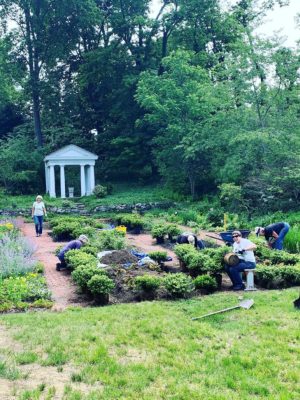 The Garden Club of Hingham members design, install and maintain the containers at the front entrance of the Library. These seasonal arrangements are a welcoming sight for visitors and hopefully provide a colorful and pleasing aspect to the entrance year-round.

The Garden Club is also involved in ongoing maintenance of The Niles Garden in the inner courtyard of the Library which is visible through the second floor windows. The garden was installed during the reconstruction of the Library in 2000; the original landscape design of The Niles Garden was a gift of the Garden Club of Hingham. The courtyard garden features many beautiful trees including: Acer griseum, Paperbark Maple, Prunus subhirtella `Autumnalis’ and Prunus serrulata `Kwanzan’, flowering Cherry, Magnolia stellata, Star Magnolia, and an Acer palmatum dissectum, Cutleaf Japanese Maple in the center of the fountain area. In addition to these special trees there are many interesting and unusual shrubs such as Daphne, Japanese Holly, Viburnum, Hydrangea and Rhododendron as well as many Spring bulbs and perennials all surrounded by a yew hedge. The garden provides year-round visual interest. It also has inviting seating with benches and shaded tables and chairs. Please feel free to enjoy this inviting open and peaceful space during your next visit to the Hingham Public Library. 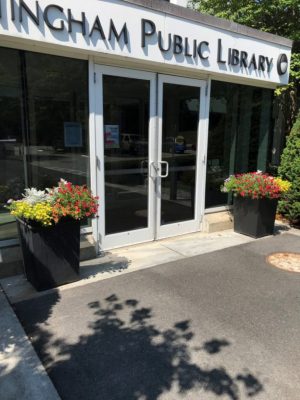 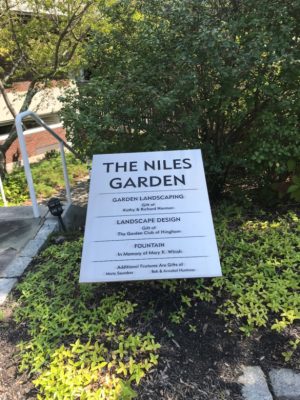 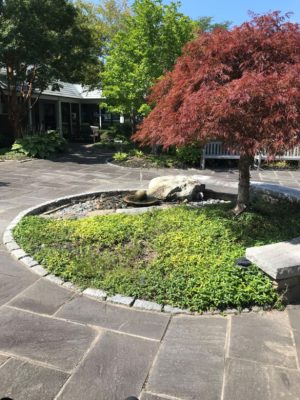 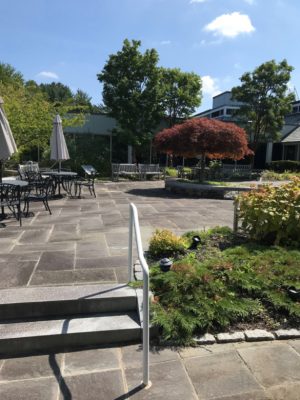 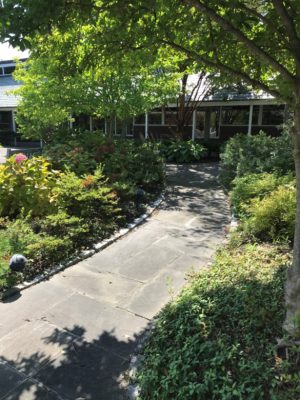 Perhaps The Garden Club of Hingham’s most visible town commitments are maintaining the three traffic islands in Hingham Center and Founders Park (where North and South Streets meet). Club members dodge cars and trucks at the traffic islands in the Center and manicure dozens of rose bushes and day lilies that surround four iron benches in Founders Park.  Founders Park was given to Hingham in 2008 by the garden club as a beautiful area of relaxation for downtown shoppers. In addition, in 2013 a sculpture by David Phillips was dedicated in Founders Park. Mr. Philips has many sculptures in Boston including the frogs in the Frog Pond in Boston Common. This artwork was a gift to the town from the garden club. The work consists of whimsical, playful bronze turtles and frogs bolted into a large granite rock from Hingham. The animals are positioned on the rock in places low enough so that children can touch them. At the dedication, then garden club President Carol Huse shared “Founders Park was named to honor the founding fathers and mothers of Hingham, who according to folklore, first landed around this spot. Today we will dedicate this sculpture to their children, and to all our children.” 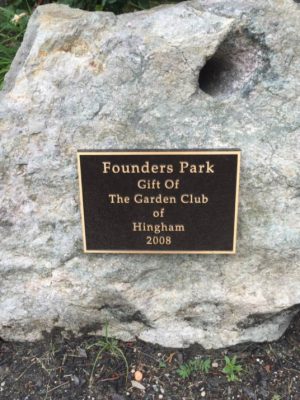 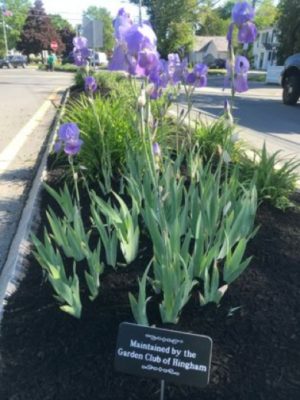 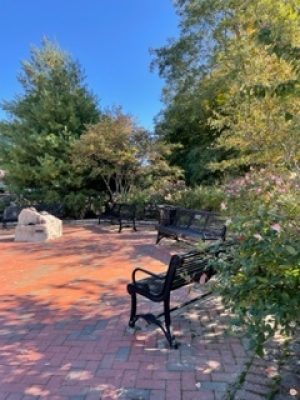 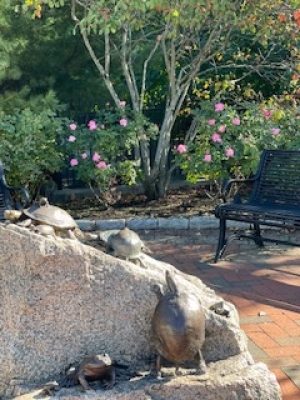 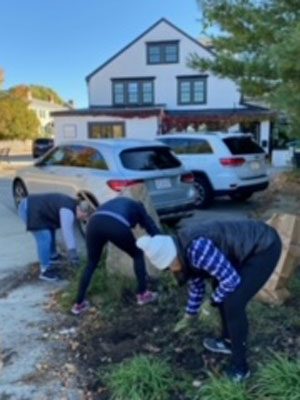