Keeping Dahlia Tubers over the Winter

Transcribed from a presentation to membership
By Susan Zuger

You’ve all seen the beautiful array of Dahlias on display here. Maura and her friends have been growing them and we really hope that everyone thinks about them. For years I did the miniatures and used them as ground cover to keep the weeds down and they bloomed!

There are a couple of little things to say about them. And see this plastic file cabinet? This is what you need to keep your tubers over the winter. When Christina talked about frost, you’ve got to have blackened frost. The one time that I though I would sort the dahlias by color, and I took them out before frost, I lost ninety percent of them. There is something in nature that puts them to sleep after they’ve had blackened frost. Then you dig them up, clean them off, and let them dry in the shade for a couple of days. Then, whip out your sharpie and put the name of the color or variety right on the tuber. It’s perfect.

For storage, use the cheap plastic drawers you can get at Walmart or potentially find at the swap corner and fill them. Some resources on the internet say use crumpled up newspaper to stuff in the drawers. Don’t do that. Crumpled up newspaper gets moisture and then you have mildew. You want to put vermiculite or peat moss in the drawers and then nestle the tubers in. And, if you have someplace that is cold and not freezing, they can sit there all winter in the plastic drawers. Even if they start to sprout a little bit, there aren’t so many of them that you’re going to break the little shoots that start to come out on them. 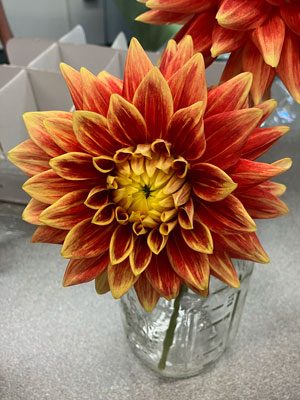 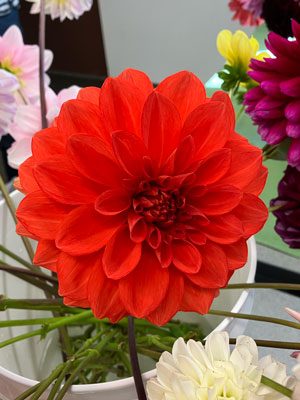 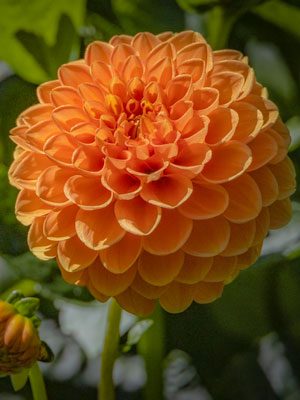